Take a look at our brochure below (click to view). 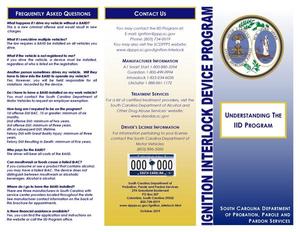 In May, 2015, the General Assembly further amended the law. Effective on the Governor’s signature on June 1, 2015, the IID Program may now penalize drivers enrolled in the Program when they:

The program participants are required to have their breath alcohol ignition interlock devices (BAIID) inspected and the data downloaded at least every 60 days by the service center providers.

Drivers with an offense date between January 1, 2008 and September 30, 2014 who decide not to enroll will remain suspended for three years beyond the initial suspension period. Such drivers who decide to enroll in the IID Program must complete the full term required by the Program.

Drivers with an offense date on or after October 1, 2014 will not have the option of getting their driver’s license until successful completion of the IID Program.  Those drivers who decide not to enroll will remain suspended indefinitely.

If your license was suspended because of an alcohol-related offense, you may be eligible to participate in the IID Program. Please contact the South Carolina Department of Motor Vehicles to determine your eligibility.

This video provides additional information for drivers who are enrolled in the South Carolina Ignition Interlock Program.